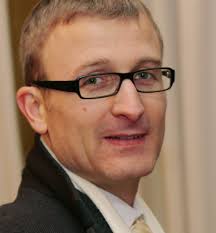 Since 2010, Michael Beigl is Professor at the Karlsruhe Institute of Technology (KIT, former University of Karlsruhe) and holds the chair position for
Pervasive Computing Systems. He is also head of the TECO research group since 2010 and spokesperson and co-founder of the Smart Data Innovation Lab (SDIL), co-director of the Smart Data Solution Center Baden-Wuerttemberg (SDSC-BW) .

From 2012 to 2015 he served as the dean of the department of Informatics. Before he was Professor for Distributed and Ubiquitous Systems heading the DUS research group at the TU Braunschweig from 2006 to 2010 and visiting associate professor at Hide Tokuda Lab, Keio University, Japan in autum 2005. From 1996-2005 he was researcher and director of the TECO research group, University of Karlsruhe, where he obtained his PhD (Dr.-Ing)(2000) degree in computing on the topic of Ubiquitous Computing environments (Kommunikation in interaktiven Räumen). His research interests evolve around people and services at the center of communication and information technology in the field of ubiquitous/pervasive/mobile computing. In his industry projects he is interested in Internet of Things (IoT), Big Data and Industry 4.0 applications. His current research focus in the combination of human computer interaction, sensing systems and appliances and sensor analytics using methods and systems of Artificial Intelligence.

Michael is member of the editorial boards of

Co-Organizer of the Workshop 2nd International Workshop on Design and Integration Princiles
for Smart Objects (DIPSO 2008), Location Modeling for Ubiquitous Computing at Ubicomp 2001, of the the Workshop “Invisible Computing” at the IEEE International Symposium on Cluster Computing and the Grid” (CCGrid’2002)